All of us are vaguely familiar with how ice is formed. However, most of us are not aware of the potential harm that growing ice can cause, and fewer of us are familiar with details of how ice grows. Knowing these details can help us figure out techniques to prevent ice from growing where we don’t want it to.

Ice is a big concern for airplanes. Growth of ice on the surface of an aircraft can change how the air flows around the plane, increasing its drag and making it easier to stall. Ice can also interfere with instruments on the outside of the plane. Airplane icing has been linked with a number of incidents across a variety of airplanes, famous examples include the crashes of: USAir 405 in 1992, Air Ontario Flight 1363 in 1989, China Eastern Airlines Flight 5210 in 2004, and Colgan Air Flight 3407 in 2009. In total there are over 150 deaths associated with these incidents alone and there are many more incidents that have occurred with smaller planes. There are a number of systems in place to prevent ice growing on airplanes, but human error and extreme weather conditions can still cause accidents.

Perhaps less deadly than planes, but still causing a lot of potential harm is icing on powerlines. Powerlines are exposed to all kinds of weather conditions, but generally it is wind and ice that can take them down. The way ice damages powerlines is pretty straightforward. As ice grows on the powerlines they eventually become too heavy and causes the cable to disconnect. Compared to airplanes, the difficulty in preventing icing on powerlines is that there are a huge number of lines spread out over a large area and it in infeasible to keep them constantly monitored.

There are some well-known examples where ice has caused extensive damage to powerlines. In December 2013, a large ice storm hit North America. In addition to tornados and high winds, heavy freezing rain produced enough ice to take down many electrical powerlines and poles. In Toronto, Canada, over 300,000 people were left without electricity due to damages caused by ice growth. In January 2007, ice damage to powerlines caused almost 600,000 people to be without power in the states of Oklahoma, Missouri, and Illinois, USA. In December 2005 an ice storm in North America caused wide spread damage to powerlines due to ice growth, leaving over one million people without electricity for over a week. And probably the most famous incident was in 1998 where an ice storm caused the failure of powerlines, primarily in Canada, leaving over 4 million people without power for weeks. The damage caused was huge and required rebuilding of many parts of the electrical grid.

How does ice grow?

If we want to prevent ice growth, it helps to understand how ice grows in the first place. It is a little more complicated than you might expect and there are many conditions to consider. The temperature, humidity, the presence of liquid water, all have an effect. We can also consider ice forming in the air versus ice growing on a surface. But even with all these factors, the beginning of ice growth occurs in a similar way in most conditions.

So why does this matter? The important part of this information is that ice will have difficulty growing on very smooth surfaces. In fact, if you have a smooth piece of glass with no scratches, ice will not grow on the surface until the temperature is lower than -30°! Below this temperature spontaneous nucleation will occur where some random location on the surface will begin to grow ice.

The same ideas also apply to the formation of rain, ice, and snow in the atmosphere. Rain drops and snowflakes do not form directly out of water vapor, they form around pieces of dust floating in the air. In fact it is possible to create rain by dispersing small particles into clouds which act as nucleation sites for raindrops.

After nucleation ice will then grow as a crystal, forming complex shapes as can be seen in snowflakes. The growth of the crystal then depends on how much water is available in the surrounding water or air.

Nucleation and crystal growth happens on the small scale. When it becomes bigger we then consider bulk ice growth. There are basically two types of bulk ice growth: Rime ice and Glaze ice. Rime ice is formed directly from water vapor in the air, without becoming a liquid first. This occurs in very cold conditions, usually when it is windy. This is the kind of icy that grows in the direction of the wind. Glaze ice is formed when cold drops of water freeze. This occurs during freezing rain and can cause thick, heavy build ups of ice. This kind of ice commonly damages powerlines.

How can we control ice growth?

Ice growth can be prevented chemically. This is commonly seen when roads are deiced with salt. The salt and water mixture has a lower freezing point than water alone, this causes the ice on the road to melt as it forms salty water. There are a bunch of chemicals available that can prevent ice growth in this way. They are generally known as antifreeze chemicals. Typically antifreeze chemicals are used to prevent liquid water from turning to ice. A common use is to prevent car coolant from freezing. A downside to chemical deicers is that they can be toxic and can have a negative on the local environment.

Ice growth can be prevented mechanically. On the wings of some airplanes, there are inflatable rubber sheets known as deicing boots. After ice forms on the front of the wing, the boot is inflated and the ice is cracked and falls off. The boot is then deflated. By doing this repeatedly during a flight dangerous amounts of ice growth can be prevented. Though a downside of the deicing boots is that they need frequent maintenance and replacing, and as an active system, requires energy to run. Some airplanes do not use deicing boots and instead redirect warm exhaust air to desired locations or have electrical heaters built into the wing. 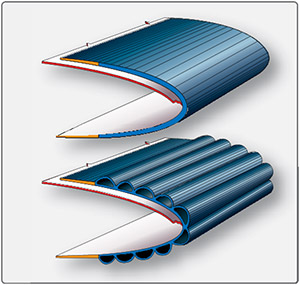 Above were some examples of active deicing systems, as they require energy and resources to be used. An alternative is passive deicing, where the surface naturally prevents ice growth and does not need to be turned on and off as needed. Passive deicing is typically done by altering the surface chemistry or structure to make it repel water.

Passive ice prevention systems are desirable as they don’t require energy to function. This is particularly useful for things like powerlines where they are spread out across the country and are difficult to monitor closely. Since ice typically forms from water, the main approach to preventing icing is to make the surface repel water in the first place, no water, no ice. Surfaces like this are known as hydrophobic surfaces and they use materials that water does not like to stick to. There are many examples of hydrophobic surfaces both in nature and made by humans. The leaves of plants are hydrophobic as ice can damage the leaf tissue. Lotus leaves are famously very hydrophobic. PTFE (commonly known as Teflon) is used as a non-stick surface and is also hydrophobic. PDMS is another common hydrophobic polymer which can be made into a spray and applied to clothing.

Hydrophobic surfaces such as these have very flexible applications. Their downside is that they tend to be fragile and damaged, requiring reapplication overtime.

What do we do?

Part of our research is investigating the effect of nanostructures on nucleation and growth of crystals, particularly under flow conditions, like those experienced by airplane wings and turbine blades. In addition to researching water ice growth, we research the growth of carbon dioxide crystals (dry ice) on nanopatterned materials. Investigations into the growth of dry ice allows us to separate the chemical effects influencing crystal growth from the structure effects. It also provides a nice model for the growth of rime ice where the solid phase is directly formed from the gaseous phase.

The effect of flow conditions is of particular interest to us, particularly across nanopatterned surfaces. There are interesting effects that occur on the nanoscale of gas flow where the gas stops behaving like a gas. We are investigating how this breakdown can affect the nucleation of crystals, particularly carbon dioxide and water ice.