Printing Pictures with Cracks – Our work in Nature Journal

Our work is in Nature (International journal of Science)

Katsushika Hokusai (1760 – 1849) is the Titan of Japanese art, as revered in his homeland as Da Vinci, Van Gogh, and Rembrandt Van Rijn are in the West. Of all his famed masterpieces the ‘Great Wave’ stands out as the ultimate testament to his artistic genius.

Now, here in the Pureosity Group at Kyoto University, we have created the smallest ‘Great Wave’ ever produced, just 1mm in width. What’s more we have been able to accomplish without the use of any pigments.

The human condition demands that we create art. Some 38,000 years before Hokusai picked up his woodblocks and kogatanaknives, an inhabitant of the Lubang Jeriji Saléh cave in East Kalimantan, Borneo, Indonesia created the world’s first-known figurative painting when she/he drew a picture of a bull on the wall using ochre. Artists ever since, from the Upper Paleolithic Era to 1800s Japan to the street artists of today, have all shared a common dependency: the need for pigments.

Instead of pigments, a type of cracking, known as crazing, was used to recreate the artwork. Professor Easan Sivaniah, head of the Pureosity Group at iCeMS explains:

“Polymers when exposed to stress – a kind of ‘stretching out’ at molecular level – undergo a process called ‘crazing’ in which they form tiny, slender fibers known as fibrils,” he explains. “These fibers cause a powerful visual effect. Crazing is what the bored school kid sees when he repeatedly bends a transparent ruler until the stretched plastic starts to cloud into a kind of opaque white”.

We were able to control the crazing process and force the crazes to organize in a periodic pattern, a process we call Organized Microfibrillation(OM). A consequence of this organized pattern is that we can scatter specific types of light to create colors across the whole visible spectra, from blue to red.

This kind of non-pigment-based color phenomenon is familiar to Zoologists an is known as ‘structural color’. It is exactly how nature produces the vivid colors seen in butterfly wings, the spectacular plumage of male peacocks, and other shimmering, iridescent birds. Some of the most spectacular wildlife on the planet is, in fact, devoid of pigmentation and depends upon how light interacting with the surface structure for its mesmerizingly beautiful effect. 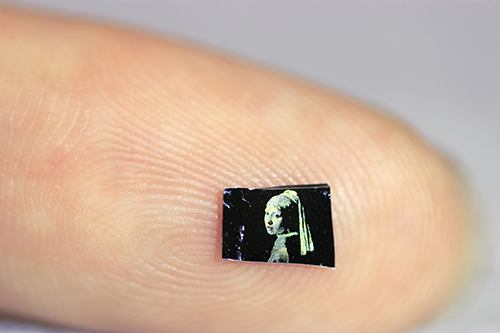 image: A picture printed without ink at the sub-millimeter scale

Our OM technology allows an inkless, large-scale color printing process that generates images at resolutions of up to 14000 dpi on a number of flexible and transparent formats. This has countless applications, for example, in anti-forgery technology for banknotes. But, we believe its applications go way beyond conventional printing ideas.

“OM allows us to print porous networks for gases and liquids, making it both breathable and wearable. So, for example in the area of heath and well-being, it is possible to incorporate it into a kind of flexible ‘fluid circuit boards’ that could sit on your skin, or your contact lenses, to transmit essential biomedical information to the Cloud or directly to your health care professional”.

OM is a flexible technology in both the literal and figurative sense. We were able to show that the technology works in many commonly used polymers, such as polystyrene and polycarbonate. The latter is a widely used plastic in food and medicine packaging, so there is potential application in food and drug safety, where security labels can be created much like a watermark to ensure a product has not been opened or sabotaged.

In addition to application of this technique, we are also excited about the basic principles that we have come to understand during this research.We have shown that stress can be controlled at the submicron length scales to create controlled structure,” he notes. “However it may be that it can also create controlled functionality. We demonstrated it in polymers, and we also know that metals or ceramics can crack. It is exciting to know if we can similarly manipulate cracks in these materials too.

Our research has been published in Nature and can be accessed at:
‘Structural color using organized micro fibrillation in glassy polymer films’, M. Ito et al. Nature (2019).
Link here: